What is Tuesday Justice?

This blog was the brainchild of Channon and Michelle (more about them below), conceived at Niagara Falls while we were walking and talking and lamenting our lack of employment in our desired fields. Michelle confessed that her dad had been urging her to start an antislavery blog for a long while, and she wanted to but was lacking in motivation. Channon said she’d been thinking of doing the same thing and, like Michelle, lacked motivation. (Though, for the record, raising a newborn is a far more acceptable excuse than Michelle’s sheer laziness.) Alas, they found themselves in the same boat. It was like a lightbulb went off over both of their heads at once, and neither knows who voiced it first, but within seconds, they knew they wanted to write a blog together. By the end of their time together that day, between a million photos of the falls and a few thousand selfies, there wasn’t a name or much of a plan, only four topics and a passion to start something meaningful. 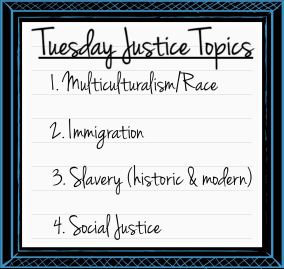 Tuesday is pretty much the most AVERAGE day of the week, right? (If you disagree, there’s proof from BuzzFeed: here and here.) Monday has a reputation of being horrible. Wednesday is hump day. Thursday is almost Friday. And everyone loves Friday. Tuesday is just…Tuesday, apart from tacos. Because C+M are both doing this as part of their everyday lives, “Tuesday Justice” is about what all people can do in their everyday lives to make a difference. It’s not about having a career in the field or a position of power; it’s about doing whatever you can, wherever you are, even on a Tuesday.

Channon (as told by Michelle):

I remember the first time I met Channon Oyeniran. It was 2010, her last name was Crump, and I can still feel the overwhelming comfort I felt to have another North American studying with me in England. Because even though she’s Canadian, the accent was similar enough to make me feel at home. Over the next year I’d come to find that the comfort she brought to me was far greater than just a familiar voice.

She had come to Hull for the same reason I did. We wanted to study modern slavery, and there was no where else to do it. But our bond went beyond our mutual academic interest. When my sister-in-law met Channon, she said it felt like we were those incredibly rare, incredibly cool twins. That pretty much sums it up. Two peas, from two countries, of two races…one pod.

We both graduated with our Master’s Degrees in Modern Slavery Studies in January of 2012, but Channon also got her MRS. She met Seun in student housing, went to church with him, and after a tricontinental long-distance relationship, married him on a gorgeous Canadian summer’s day in 2013. Today, they live in the outskirts of Toronto and have the most precious child in the world, Araoluwa Oyeniran (see photo). Channon is also Vice President of The Ontario Black History Society.

Michelle (as told by Channon):

The first time I met Michelle Palmer or “Miss Palmer,” as I call her, was in Hull, England in September 2010. I was so excited to find out that there was someone from the States in my Master’s program of only three people (myself included)! The day we met was on a tour of the City of Hull, and we clicked right away! I was so happy to have met someone who was just simply kind, funny, talented and had the same interests as I did.

Michelle and I came to the University of Hull, specifically the Wilberforce Institute for the study of Slavery and Emancipation (WISE), to study and learn more about a topic that was near and dear to both of our hearts. Our friendship continued to blossom, and I realized very quickly that I had a found a friend for a lifetime! Just like Paul McCartney and Stevie Wonder’s 1982 hit “Ebony and Ivory”, (that coincidentally looks at issues of racial equality-part of what this blog is about!), Michelle is my “Ivory” (another name I call her)…we just simply go together.

Michelle and I both got our Master’s Degree in Modern Slavery Studies in January 2012 and while I went back home to Canada, Michelle continued to live in Hull (a city that we had both fallen in love with) for three more years and was active in her church, Hull Vineyard! “Miss Palmer” lives in Pineville, Louisiana with her cool and funny family!

Disclaimer:  We understand that some of the topics discussed here are sensitive. We will endeavor to do our absolute best to present clear, factual, objective information. You are, of course, entitled to disagree. However, belligerent, aggressive, derogatory comments will not be tolerated.

Here at Tuesday Justice, we hope to create a resource for people to learn about some of the facets of oppression, equality, and freedom at work in our world.

Our goal is to provide everyday people with a greater understanding of these issues, in order to empower them to work for the full freedom of all people.

We are so glad you’re here!